Making Divinity On A Snowy Day

Today was going great. I was well into my day of holiday treat making with Dorie Greenspan’s Truffles resting in the refrigerator when I thought to myself “why not try a new recipe? I’m on a roll right?” I have had The Casual Baker’s Divinity recipe printed out for just the right moment, and reading through the ingredient list I was pleased as punch with myself finding that I was well stocked. So off I went into the land of Divinity. 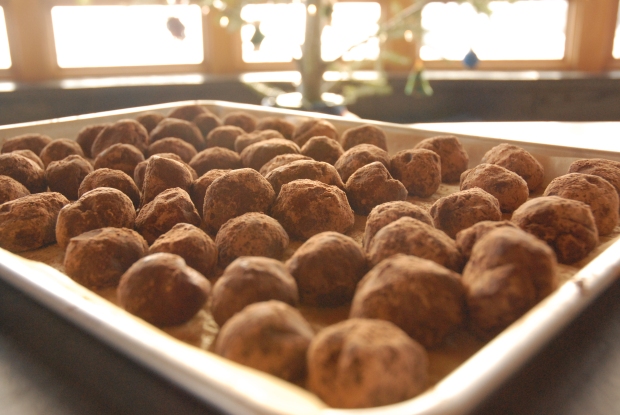 In my own defense, there was no way for me to know what was in store for me. I laugh at myself right now, perched at the kitchen bar typing away after making the whimsical decision to make divinity. Glancing over with a heavy sigh at my green marble countertops and previously spotless stove-top now covered with Divinity guts. A sticky, gooey mess; I’ve gone and candied my stove-top. My youngest, the ever happy soul that she is, has set to scooping up the goo and has turned it into her own candy project; far be it from her to let sugar, water and organic corn syrup go to waste.

What happened, you ask? All was going just fine; I was cruising along solo in the kitchen (read: without distractions).  I find that I need a distraction free space while making candy, but somehow it didn’t dawn on me that making candy was exactly what I was doing (Yes! I did read the recipe thoroughly but was thinking more meringue than candy). I’ll blame it on the absence of a second cup of coffee.

In walked D2 (Daughter #2) who set about to do her English assignment at the kitchen bar. “This is great,” I thought to myself, bursting with pride “she is self-motived and getting her work done.” …until the questions started rolling in. Distraction number one. Next, my husband walked in and started a great conversation (distraction number two) which took me away from the stove-top. Have I provided enough foreshadowing for you to guess what happens next in our holiday tale of woe? From the other room where I was in deep discussion, I heard my pot boiling over…”Oh, SUGAR!” I rushed back to the stove and it looked like a mad scientist’s bubbling mushroom spilling over the sides; an oooey-gooey syrupy monster.

I tried to save it. I really did. I grabbed the printed directions and the candy thermometer to get my bearings. The temp read 253º, not 255º as required but I couldn’t get it higher without it growing into another bubbling monster so I poured it into my previously prepped foaming egg whites poste-haste which, as you may have surmised is not exactly how Sheena S. of the Casual Baker had envisioned the optimal scenario. I put the hand held blender to work, but two minutes into the seven called for it became readily apparent that this was a bad idea. I was splattering Divinity monster guts everywhere. It was supposed to be thick, but after double the time called for it looked just as runny as ever. I switched to a bigger bowl and stationary mixer as a last gasp effort to save my Divinity. Too little too late; nothing would save our stickily intertwined fates from a fall from grace of epic proportions.

So what’s a girl to do? I peeled away my printed directions that were now at one with the counter and started to read the comments after the recipe directions. And here it was that I learned from the Divinity lovers community that Divinity is a fickle creature. Some even purported that if it is raining outside she refuses to take on the task because that subtle amount of moisture can make the difference “between bites of divinity and a puddle best consumed with a spoon” (KitschenBitsch). Others go on to say that 255º (let alone 253º!) is a tad low and they like to wait until the candy reaches 350º.

Well Kitschen Bitsch, you are correct. It is snowing lovely large flakes of frozen rain outside and I have a big fat puddle inside. Once again the weather has ruined my attempts and it has nothing to do with the distractions. Thanks for the easy out, until a sunny day when I’ll attempt it again!

Wishing you wild adventures from our kitchen to yours,

Pass it on so others can enjoy this too!

Tags: distractions, Divinity recipe, dorie Greenspan
From: Baking, Cook the Book, Desserts, Uncategorized
← 3 Things That Could Happen When You Send Your Husband To The Supermarket.
Are You Hungry for Bûche de Noël? →
2 Comments Post a comment

I'd love to hear from you, let's connect, share your thoughts Cancel reply